You will be falling in Namdo-province's beauty by former people's Art products, various temples and Buddhism historical relics and various mountain's shape of Mt. Mudeung.

Mt. Mudeung is a representative symbol of Gwangju, which contains the ideologies of Namdo people. Pink and royal azaleas in Spring, red leaves and purple eulalia in Autumn, snow flower in Winter are the best charms of Mt. Mudeung.

Plaza in front of Provincial Office and Chungjangno


May 18 plaza in front of provincial Office, which is a symbol of Gwangju Democratic Movement, is famous for holding citizen meetings during the movement. Chungjangno, a heart of Gwangju is a center of shopping and fashion, and a must-see for young people.

In Spring, cherry blossoms at their best form a tunnel at the mouth of the park. Full-blown acacia blossoms in Summer, and red and fallen leaves in Autumn are additional charms of the park. Strolling along the path is a good idea for relaxation. In particular, the sun-rise viewed from the park is spectacular.

Enjoying the Moon at World-Cup Stadium


The stadium designed environmentally-friendly, was judged as 'the most beautiful stadium' from the inspection team of FIFA. And here, Korean representative team went to the semifinals of the 2002 World-cup. Its external appearance symbolizes ' Go' of Gossaumnori, a traditional folk game. Moon viewing late at night stands comparison with any other attraction.

Bingwoldang is a lecture hall of Wol bong local school from which famous scholars and public servants of Joseon period such as Kim Dae-seung, Park Sang, Park Soon, Kim Jang-seang and Kim Jib were produced. As Hwangnyong River has good conditions as a habitat for birds, protective kinds of birds such as common herons and egrets stay here in groups. Especially, it is said that the rain-fog of the river is mysteriously beautiful.

Pochungsa Shrine was established to honor fidelity of five royal soldiers such as Go Gyeong-myeong, Go Jong-hoo, Go In-hoo, Yu Pang-no, and An Young who had raised an army of 7,000 in the cause of justice loyalty and had died a glorious death on the battlefield. It is a charm both for domestic and foreign visitors. Gossaum Theme Park in Daechon field shows regionally-distinctive cultural remains.

Gwangju night view seen from the Jatgogae Ridge on the way of Mudeungsan villas has a picturesque beauty. The fortress site of Mujingoseong surrounding the Jatgogae Ridge is oval, 3,500m in circumference along the ridgeline of the mountain centering on Jangwon peak.

Jungoe Park is popular as a city park which provides various entertainment facilities and beautiful nature. As it includes an educational promotion center, Biennale exhibition halls, and game facilities, it is crowded with people during holidays. In particular, it is famous for autumnal red and yellow leaves, and the Mujigaedari(rainbow bridge) installed at the gateway of Gwangju symbolizes Biennale events. It is also famous for Kimchi Festival.

The Epicure must be like Namdo-province's taste by fresh agricultural and marine products. Those are produced by plentiful Honam field and southwest sea-shore.

Boribab is made of seasonal vegetables, red-pepper, soy paste, sesame oil. It stimulates one's appetite and is digestible. Boribap with a cold Dongdong-ju(rice wine) followed by mountain-climbing is more recommendable than any other dinner course. Gwangju Kimchi

Kimchi from Namdo centering on Gwangju is widely known as tasty. Gwangju Kimchi is characterized by hot and thick taste from plenty of ingredients such as pickled fish, powdered red-pepper, salt and garlic. The city government hosts Gwangju Kimchi Festival every year to inform the superiority of Kim-chi domestically and internationally.


Side street of Hyundai Department Store is famous for duck stew. As Gwangju Oritang is made of plenty of sesame powder and parsley, it is very tasty. Duck stew made of jujubes, chestnuts, ginseng, sliced antler and glutinous rice is recommended as a healthy food. 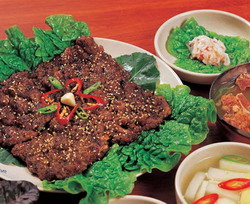 There are lots of Ddeokgalbi restaurants in front of Gwangsan district office. To make Ddeokgalbi, ribs are minced, made square like rice cake, seasoned with garlic, ginger, and sesame oil and roasted on charcoal. It is good as a side-dish in drinking. Its tasty smell attracts passengers.